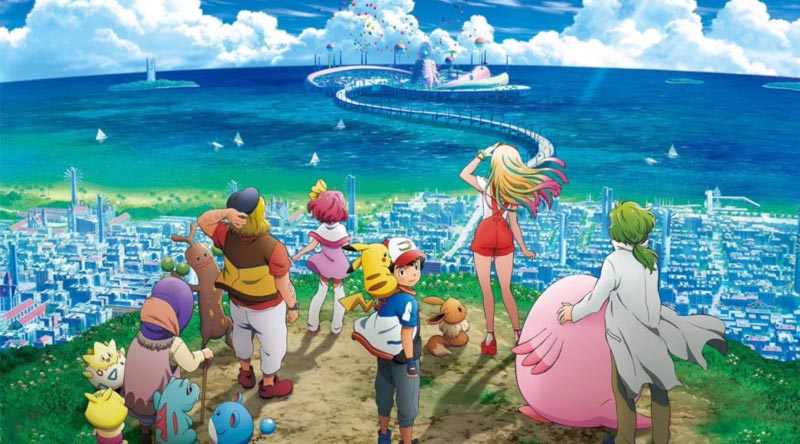 It is set for a July 13 release date, but we’re lucky enough to get a sneak peak. And it’s safe to say that the new Pokémon the Movie: Everyone’s Story visual is awesome. It makes us look forward to the premiere. Yoshitoshi-san, the artist that created this illustration, did a marvelous job with it. The heroes of the franchise – Ash and Pikachu – are in the center.

But we can also see 5 brand-new friends that will join them in their adventure. Welcome to Fura City! The boys and girls in Japan are lucky, because they’ll find this visual not only online, but also in the famous Pokémon stores and centers in their home country. Without a doubt, the anticipation is building up, as July 13 is just around the corner.

What will Satoshi (Ash’s name in Japanese), the world-famous Pikachu, and their new buddies be up to in the movie? Will we get to see more of the old characters? In any case, the new Pokémon the Movie: Everyone’s Story visual is worth a thousand words.

Pokémon the Movie: Everyone’s Story Is A Sequel

The fans know that the previous film in this franchise was I Choose You. This time around, we’ll follow Satoshi to Fura just in time to check out the Wind Festival. The locals believe that Lugia will share the “blessed wind” with them. It’s worth mentioning that Everyone’s Story is the 21st (!) movie about Pokémon (and the 2nd reboot).

Another important fact: both ES and I Choose You don’t have anything to do with the TV series and exist in a different universe. Directed by Tetsuo-san and written by Eiji-san, this is going to be one epic movie, regardless of whether you’re a fan or not.