Sometimes, we fall in love with a certain movie/series bad enough to want to master the musical instrument(s) that the main characters play. In this 10 best anime instruments survey made by Anime!Anime!, the fans were given a chance to name those special anime that inspired them to play the guitar/the piano/other instruments.

It’s no secret that some of the most popular anime series feature heart-warming and heart-wrenching musical performances. But it is one thing to really like a performance on the screen and a totally different story to dedicate your time and energy on learning to play an instrument.

Yes, anime is capable of making us do all kinds of heroic things, and the following list of 10 best anime instruments will give you a general idea of which instruments are more “trending” in 2018. Important note: since the list is too big to discuss every single spot in details, we’ll just give you the names right now and talk more about the winners – the top-3. Here are the instruments that made it into the list:

As you can see, except for the bass and the drums, we’ve got orchestral instruments dominating the survey. And while the oboe only managed to get the #9 spot, the violin turns out to be very popular among the anime enthusiasts.

Well, no surprise there: it’s beautiful, elegant, sounds amazing, and the heroes look stunning playing it. Ok, now let us finish this 10 best anime instruments list by checking out the champs. Can you guess which instruments will dominate the survey? Share your thoughts in the comments!

Say what? Yep, you heard it right: this orchestral instrument is a crowd-pleaser. It has a beautiful tenor timbre and is one of the main “characters” of Hibike! Euphonium. Looking at the pictures from the anime, you might think that the girls are struggling to stay strong on their feet, as the euphonium seems to be too heavy for comfort. But that’s not really true! It may take some getting used to, but these gals certainly do look great together.

Dubbed the king of modern-day instruments, the piano is equally epic, heroic, sad, intimate and everything else in between. According to the experts, it became wildly popular in Japan and the neighboring countries after the premiere of Nodame Cantabile – a legendary anime that followed the life of Nodame, a gifted piano player. Of the 10 best anime instruments, the piano is definitely the most soulful one. The fans of Your Lie in April will remember those tear-jerking scenes where the main heroes play together (Arima on the piano and Kaori on the violin).

As one of the most versatile instruments on planet Earth, the guitar is capable of creating a huge range of emotions and rock the house like it’s the end of the world. Yui from K-ON! Handles the guitar like a true bad-ass and makes all the young boys and girls want to learn how to play it to be just as cool.

With 23% of the total vote, the guitar won today’s competition by a landslide. Both the acoustic and the electric guitars are worth mastering. The acoustic is a bit more intimate, while the electric is all about that stadium fever. 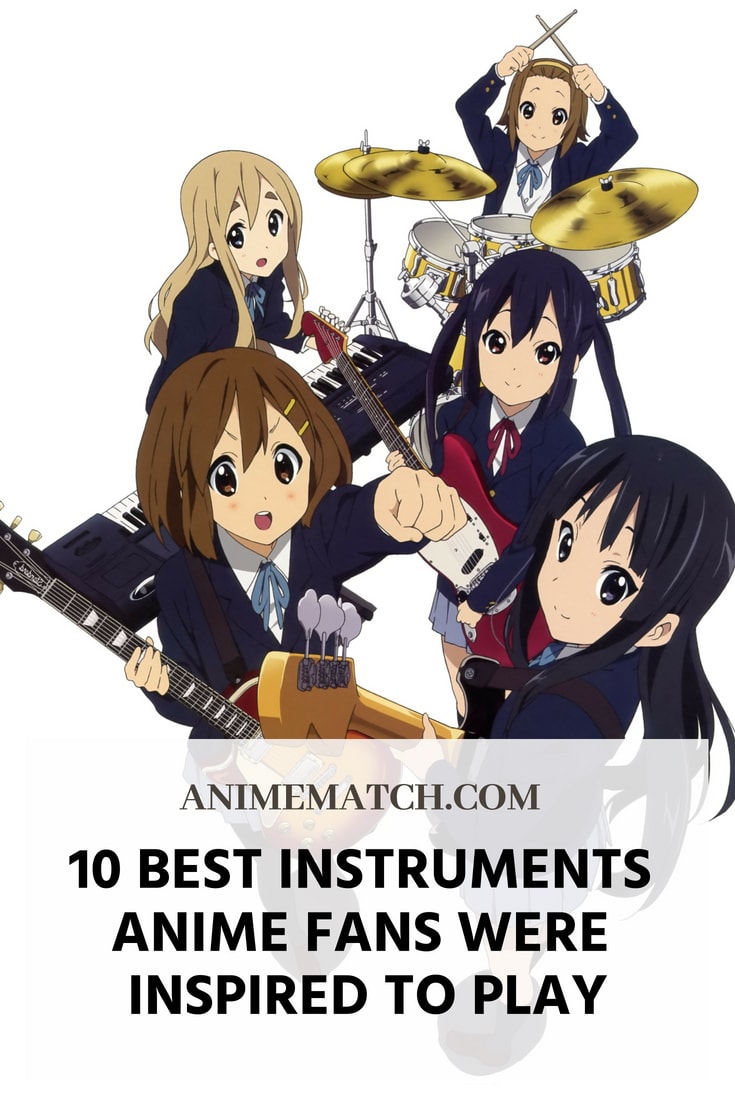